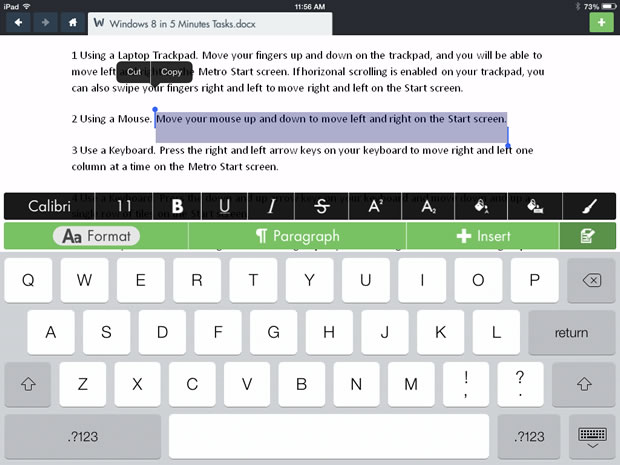 iPad owners tired of waiting for Microsoft to launch a version of Office for the tablet now have yet another option.

Released Thursday, HopTo is a free iPad app that lets you view, edit, and create Word documents and Excel spreadsheets, and view PowerPoint presentations. The ability to edit a PowerPoint file is slated for an upcoming version.

You can view PDFs and a wide array of image files, including JPGs, PNGs, TIFs, and animated GIFs. You can listen to MP3s, iTunes M4A files, and other music formats. I was also able to play QuickTime video clips.

You can access files and documents from Dropbox, Box, and Google Drive. A representative for HopTo told me the company plans to add support for Microsoft SkyDrive in the near future. You also can retrieve files from your local computer by installing a File Connector program. For now, the program works only on Windows PCs, but HopTo said that Mac support is coming soon.

Opening a Word document or Excel spreadsheet displays the file fullscreen with a formatting toolbar at the bottom. Tapping on the screen triggers the iPad's keyboard. The app wisely avoids cluttering up the interface with pull-down menus or a large ribbon. Instead, the formatting toolbar provides access to all of the basic Office commands and features.

As always, the iPad's onscreen keyboard takes up a fair amount of space. But there's still enough room to see a few paragraphs or lines of your document. And if you use an external keyboard, so much the better.

To create a new Word or Excel document, simply hold down the plus button in the upper right corner of the screen. That same button lets you open tabs in which you can retrieve and switch among additional files. HopTo displays a list of recent files so you don't have to hunt for them in the cloud. A built-in search feature also helps you find specific files by title or content.

HopTo is a solid app with a clean and simple interface and an easy way of working with your online files. And since it's free, it's certainly worth trying. Who needs Microsoft when apps like HopTo can deliver Office to the iPad?