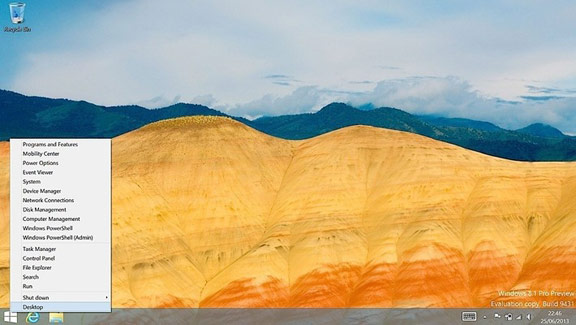 The first major update to Windows 8. A free upgrade for existing Windows 8 owners. A $120 (or $200 for the Professional Edition) purchase for everyone else. A collection of tweaks to tighten up some of the wonkier bits of Windows 8. A resurrector of start buttons.

Who Is It For?

Windows 8 was more than just a new way about thinking about the desktop interface for Microsoft; it was a major bet that touch was/is the future of computing. A bet that it could flesh out its meager Windows App store. A bet that people would come around to Metro's dramatic changes and not run screaming in the other direction.

It seems that Microsoft may have underestimated the intensity of some of that running and screaming though, particularly in regard to the lack of a start button, and the lack of an option to boot right to desktop. The moaning has been load enough, it seems, that Microsoft has seen fit to acquiesce just a little bit, and just there.

Windows 8.1 matters because it represents dual opportunities for Microsoft: A chance to double down, and a chance to backtrack before it's too late. And it manages to do just enough of both to keep converts happy, and to lure its share of skeptics over to the tile side.

When you first boot up Windows 8.1, you aren't going to notice many differences slapping you across the face; the user interface is pretty much exactly the same. Metro is still your colorful little landing page by default, and the traditional desktop still lives behind it. You've still got your Charms off to the right, your app drawer hiding away at the bottom. Live tiles can be smaller now, little one-by-one squares that remind you of Windows Phone, but other than that things look pretty much the same. At a glance, anyway.

Which frankly they'd damn well better. After an upheaval like the transition to Windows 8, the last thing anyone needs is more wild design changes. Windows 8 was/is Microsoft's future. The tiles are canon. There will not be any retcons. Not now, anyway.

That doesn't mean Windows 8.1 is just some Windows 8 rebrand. Tucked away beneath the now-familiar veneer of the desktop and Metro screen are pockets of beautiful new functionality. You just have to dig a little. Here's what you'll find.

Hey, you want a start button? Fine, here's a start button. But if you're pining for start-menu-days-gone-by this is only half of what you're looking for. Windows 8.1's new desktop start button launches you right to your Metro screen, and really, it's just another way to accomplish something you could already do with the Charms bar and the Windows key. But if your muscle memory still has you gravitating towards that lower lefthand corner, it's a nice addition.